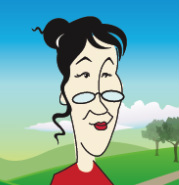 Jeanine McGregor (a.k.a. Ms. Mac) is an award winning educator, speaker, and author. For more than three decades Ms. Mac has been using researched based strategies to help children learn at unbelievably accelerated rates. As a teacher, school director, and parent, the children under her instruction have consistently been able to master academic skills considered years beyond their ability by conventional standards. She continues to write books and make resources to change children's lives for the better. Also currently working as an educational consultant, she is coming alongside parents, teachers, and schools for the educational advancement of children across the United States.
AUTHOR
Midget Digits Book Series
Eight Math Mnemonic Books for Children